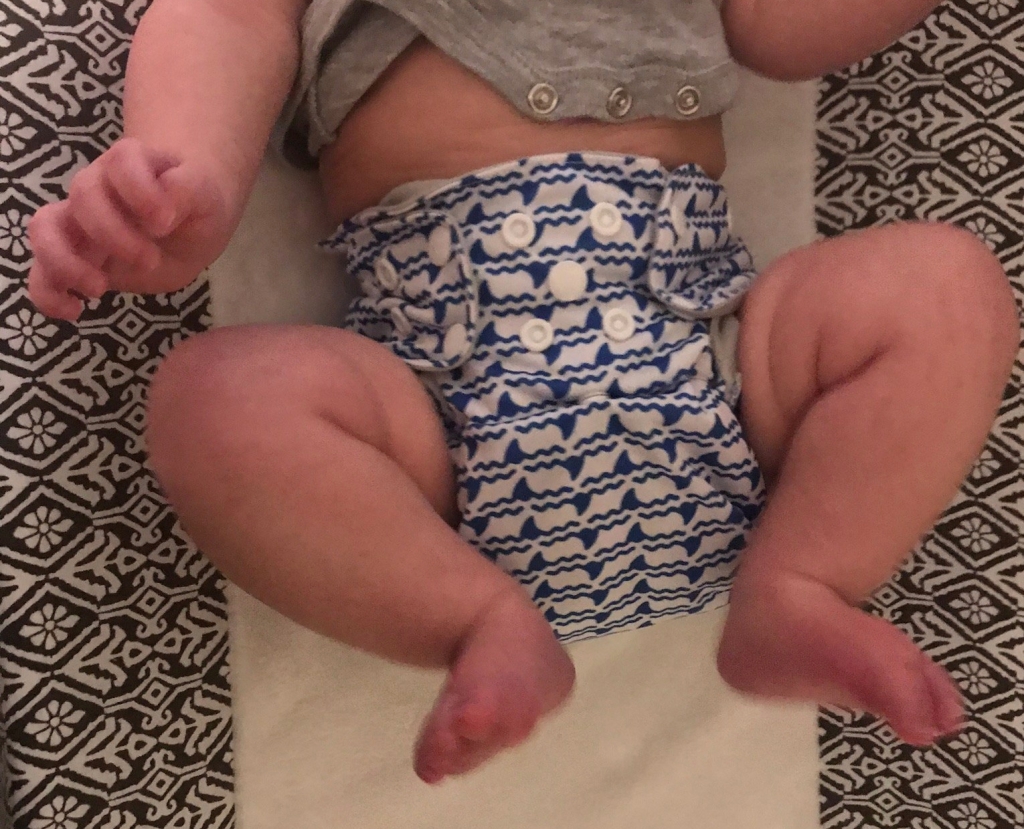 We had a baby, nicknamed Mim, six months ago. It’s been wonderful and we love her. But I hate changing her diapers. Hate it. It’s gross, poop gets smushed everywhere, there are blowouts, and diapers are sooooo expensive. I thought I’d get used to it, like I got used to picking up Kermit’s poops, but I never did. And I kept thinking, “why?” If we can train dogs to go outside, why can’t we train babies? A few weeks before Mim was 6 months, I started getting very nervous about her poops. We wanted to start her on solid foods and I was not ready to transition to solid food poops. Surely there had to be a way to avoid this. If we could train Kermit as a puppy to potty outside when living in a 3rd floor apartment, couldn’t we figure out something with our human kid? So, I did some research on early potty training.

In many other countries, early potty training is the norm. Kids are out of diapers before they turn two. In the US, kids wear diapers for years. Early potty training is also known as elimination communication or “EC.” EC is learning your baby’s cues when he or she is about to go, and then getting them to a toilet. This can start when babies are as young as a few days. Eventually, you get better and better at reading your baby and can get them to an appropriate place before they poop or pee. As babies get older, they get harder to read (or we just aren’t used to reading the cues) and they get used to just going in their diaper. I’m going to refer to it as early potty training because the ultimate goal is for kids to become independent in the bathroom.

There is a lot of information out there (research, history, and different approaches on how to do it) and I’ll leave some links at the end of this post so that you can read more into it on your own. I’m not an expert so I want to stick to my own thoughts and what we did/are doing for our daughter. I’m also lucky that we are in the position where I could quit my job to be a stay at home mom. I think me being home with the time to do this has made it much easier.

I decided to try early potty training mostly because I hate diapers. I want to save money and I want to avoid the bribery and power struggle that can become potty training an older toddler who can tell you no. I want going to the bathroom to just be a natural thing that Mim does, like eating or sleeping, not something that she needs to do in order to earn a treat or a toy. We give our babies cues for so many different things; Mim knows that the sound of a white noise machine in a dark room means time for sleep, the sight of her bottle means milk, sitting in her high chair means food, why couldn’t I add a cue for going to the bathroom?

The basic idea is actually very similar to potty training a puppy. When we trained Kermit, every time we went outside I’d take him to grass and say potty. Lots of praise when he did it (poop or pee). If he had an accident I’d say potty and take him outside. We never used any type of punishment. Eventually, he understood what potty meant and where he could do it.

I started this with Mim a few days before she turned six months. We’ve only been potty training for about three weeks now, but it’s been going so well I wanted to share some insight in case others are thinking of doing the same. If I could turn back time, I would have started sooner. We got a potty training seat; I figured we wanted her to go on the toilet, not in a bucket or in a smaller toilet so I didn’t want to train her to go in something and then have to break her of that as she gets older. I started putting her on the potty first thing when she woke up, before and after naps, and after she ate. I would repeat the word “potty” over and over and made a sign for potty (make the letter T in American Sign Language and wave your hand back and forth). Then I sat her on the toilet and repeated “potty” with the sign, and I made a hissing “ssssssssss” sound. Sometimes it would take a few minutes so I’d sing songs or bring a toy in for her. Once she peed I would make the ssssss sound and say “potty” again as she does it, then we would celebrate. I’d clap and laugh and make a big deal. Then we’d flush the toilet (she loves watching).

I read that babies need to feel wetness to determine how they got wet and that they don’t like to be wet. So we ordered some cloth diapers for her to wear during the day (we still use disposable at night, for naps, and sometimes when we go out). The downside is I can’t tell when she pees so I can’t get her on the toilet immediately after she does (there’s no blue line) so I just put her on every time I change it.

I buckled down and did a few days of diaper free time. I put down lots of towels and waterproof crib cover over her activity mat. Every twenty minutes or so I’d put her on the toilet, and sometimes she’d pee but sometimes she wouldn’t. If I didn’t catch her and I saw her pee I’d still say “sssssssssss potty” and then bring her to the toilet. We got fairly decent with pee, but she still would only poop in a diaper (she still wore one in the stroller and car seat). I continued with the diaper free days. We had one poop accident (she was in her bouncer drinking a bottle). It wasn’t as bad as I thought it would be, but she did need a bath right after.

I continued to keep her diaper free as much as I could at home and we’d just go sit on the potty every twenty minutes or so. Finally, she pooped in the toilet! I was thrilled. I wasn’t even there for it-I had gone out and given my husband instructions to put her on the potty right after her nap before she gets her bottle. And, bless him, he listened! He said after a few minutes of sitting on the potty he heard a plop! Then another plop. He said they celebrated and she was smiling. He also said it was much easier to clean up than a poop diaper. Mim obviously isn’t fully potty trained yet, but we are getting there. The goal is for her to signal when she needs to use the potty and we’ll take her. Once she gets older and can go by herself she will be fully trained.

So far we’ve had three successful potty poops, and several potty pees a day. We still have diaper free time but I think the cloth diapers will help her feel wet and get the message. She’s getting more used to actually peeing before and after naps so that’s been helpful. Not gonna lie, it’s been challenging, but Mim has done so well and I’m hoping that in the long run it will be worth it. 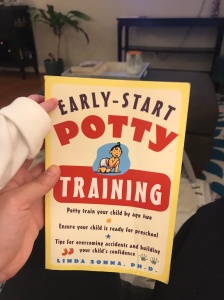 Here are some links to articles I found helpful. I also ordered Early Start Potty Training by Linda Sonna, which had some good information and I found it encouraging.

Can a 6 Month Old Be Potty Trained? This one has pros and cons

Early potty training definitely isn’t for everyone, but if you’re thinking of trying it, good luck! It’s really not as daunting as it seems and it’s definitely a long end game. Please reach out if you want to share successes or vent frustrations!

View all posts by Jen Williams

One thought on “Baby Potty Training”